Why Should You Start Thinking about Valentine’s Day in May?

It’s nearly May, so Valentine’s Day is probably the last thing on your mind, but, here in the office, we’ve been thinking about it a lot! Over the past two years we’ve noticed a big jump in donations and ticket sales on February 14th. So, what’s going on?

Let’s look at our aggregated data. This is aggregated data from over 200 organizations that use our PatronManager CRM system and for whom we process credit card transactions. This data represents approximately $14 million in ticket sales, subscriptions, and donations since 2011.

Let’s look at this data and see what we can learn and how you can use this insight to boost sales and donations next February. 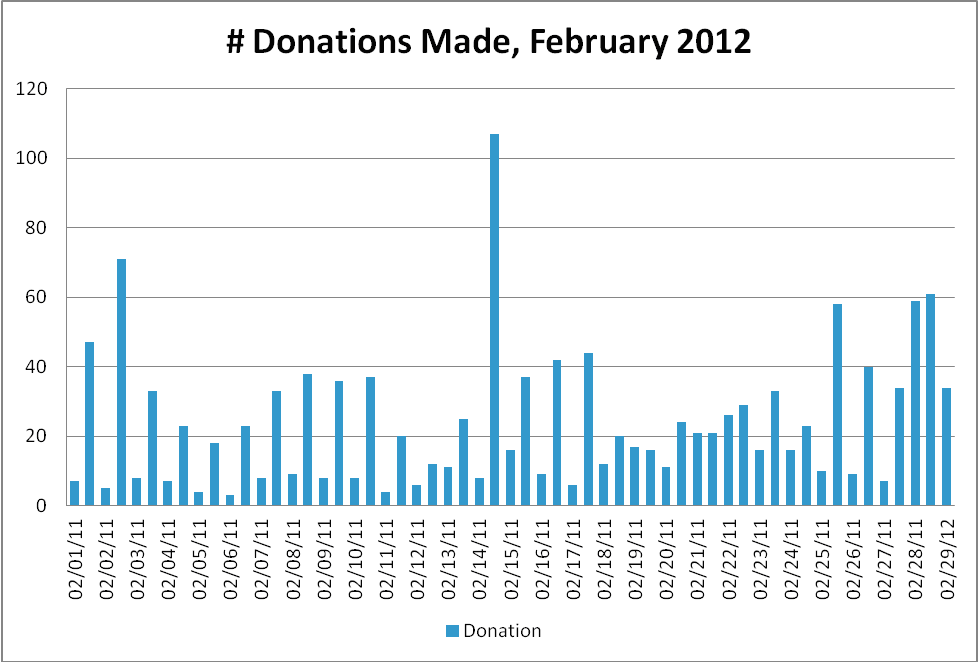 [/frame_center]
See how striking the jump from February 13th to 14th is? That’s a 325% jump from one day to the next! Compared to typical days at other points in the year, this same pattern holds up – Valentine’s Day is booming. It’s still short of the big donation days at the end of the year, but considering patrons’ purse strings might be a little tighter as they prepare their taxes and recover from overspending during the holidays, mid-February makes an especially strong showing.

In fact, Valentine’s Day this year ranks as the fourth highest day in ticket and subscription sales ever processed through PatronManager. Is this just a fluke? That donations and ticket and subscription sales all jump up on February 14th certainly is surprising no matter how you slice it. Digging into the data reveals that lots of tickets to galas are sold in February, many of which are recorded as donations, but we also see that regular, non-gala donations make up a larger-than-usual slice of donations on Valentine’s Day than the rest of the month.

But why? My theory is that it’s not only gifts between lovebirds but also gifts for wedding anniversaries. Valentine’s Day is a very popular day for weddings, and what better last-minute wedding or anniversary gift for the couple who has everything than a night out on the town, including tickets to a show? It’s also interesting that tickets are purchased on Valentine’s Day itself and not in advance, which adds further support to my theory. What’s a better last minute Valentine’s Day gift than a ticket?

Have a look at your own sales data – does it reflect this trend as well?

So, next year, as heart-shaped boxes of chocolates start taking over drugstore shelves and champagne is featured at the wine shop, consider how you might use this knowledge to help your organization get a bigger piece of this busy day. This seems like a great time to ask for donations or to feature a last-minute discount on pairs of tickets for both couples and their friends to use.

Valentine’s Day is a social holiday. Try sending a promotion, an ask, or a love letter to your patrons on social media and see if the response surprises you. Maybe you’ll convert a secret admirer into a smiling donor.