More frequently than you might expect, I find myself having debates about the merits of new technology platforms or marketing techniques. Because I’m often the only person in any given room who loves QR codes, today I am here to defend them.

If you’re asking that, you’re not alone. According to eMarketer, only 21 percent of Internet users say they know what a QR code is. But here you go:

Looks familiar, right? You’ve probably seen them in magazines, on posters or postcards, or maybe on a store window. When you scan the code using an app on your smartphone, it does something in response. It sends you to a webpage, plays a video, or tells you when the next bus is coming, for example. The app I use is called RedLaser. It’s free and available for iPhone, Android, and Windows Phones. (Try it now, especially if you never have before. Use a scanner app to scan the code above.)

What I love about QR codes is that they create a seamless interface between the “real” world and the Internet. I’ve joked (well, maybe only half-joked) that if I could have the Internet installed as a chip in my brain, I would do it –- and, for now, QR codes come pretty close. They eliminate barriers to getting information. Instead of having to type a URL on my iPhone’s tiny touch screen, I just open my “RedLaser” app, scan the code, and get the information I’m looking for.

But they’ll never catch on – as you just said, no one knows what they are!

Well, it turns out you don’t need to know what something is called in order to understand what it is. That same eMarketer article says that 81 percent of Internet users can identify a QR code when shown one. So they’re catching on.

The real way that QR codes will catch on, though, is if brands, advertisers, and, yes, arts organizations start using them smartly in a way that provides real value to the customer/patron –- rather than as just the newest coolest marketing fad. To that end, here are some great things I’ve seen happening with QR codes in the arts (and elsewhere) and some not-so-great things. 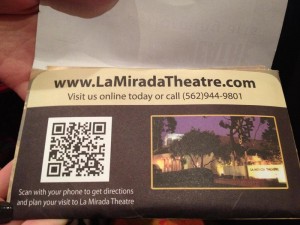 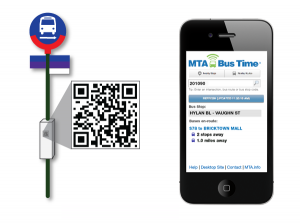 What definitely NOT to do with QR codes:

The future of QR codes can go in one of two directions, depending on how technology evolves.

If code readers like RedLaser start being included as a standard feature of smartphones – something that’s “just there” rather than an app you need to download separately – I can see them catching on for real and sticking around for a while.

But if that doesn’t happen, I have no doubt that a similar technology will come along based on the same idea. Look, it’s not that I’m super attached to these weird little black and white squares themselves (although I did get a QR code printed on the back of my new business cards…); I’m attached to what they make possible – location-based simplicity. Maybe it’s true that this particular implementation isn’t the answer and that QR codes will die out. Maybe by the end of the year we’ll just be Shazaming everything all the time. Either way, we’re clearly taking steps towards more integration of offline and online worlds, making it easier and faster to access information from wherever we are.