E-marketing E-ssentials: As the Web Turns Mobile, What Should You Do About It? 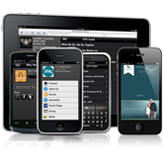 Several times during the past two decades the web has shed its skin and become something new. I remember when the web was all text, and then images came along. After that it was transformed by e-commerce, and then by video. The latest transformation, happening right now, is the move to the mobile web.

Last month I joined a throng of 85,000 who participated in the annual Dreamforce conference in San Francisco, produced by our technology partner Salesforce.com. In future blog posts I’ll offer more impressions of the event, but here I want to talk about the mobile web — because mobile was the central theme.

The mobile web is not a new technology or a new paradigm. It’s simply a further validation that people want the power of the Internet with them at all times. The time-wasting activity once known as “surfing the web” is now a nearly 24/7 experience across most aspects of daily life. That means people want (and will get) mobile devices. The predictions I heard were amazing. And according to the International Data Corporation, vendors will ship 1.8 billion mobile phones this year alone! In an interview the other night on television, Bill Clinton talked about how mobile devices are helping developing countries leapfrog from a rural stage to a technologically advanced one, all in one jump.

The problem we’re facing is that for almost the first time in the history of the Internet, hardware is racing ahead of software. You can buy a device in any form you want — from an iPad to a Kindle Fire to an Android Phone — and consumers want to do the same thing on each of these devices. They want movies on their iPhone, just as much as on their 24-inch computer monitors.

Until now, websites have been built to deliver content for large computer monitors, not small-screen devices. So there’s a race (and a debate) as to how to deliver a great user experience for both sizes. Today, there are three basic approaches:

There’s a lot of user interface wizardry going on here, since the code needs to be nimble enough to render a different user interface at the same time depending on what device is being used.

At the same time, the new HTML5 standards that support audio/video will put an end to the hassle that Apple created when it refused to allow Flash technology on its devices.

More and more organizations in our industry are demanding “mobile friendly” user experiences. And many are spending significant resources on building proprietary apps to deliver their content on mobile devices. But consumers are notoriously lazy. They don’t want to download extra apps, they don’t want to install them, they can’t find them when they do have them installed, and they forget to look at them.

If an app offers something that is significantly better than the web experience and is something that people use regularly, like Amazon.com, Spotify, or the New York Times, there’s a good argument for a downloadable app. However, for most arts organizations — where the average patron visits your site or attends your events once or twice in a few months’ time — it’s probably wishful thinking to expect the majority of your patrons to download a proprietary app and use it in conjunction with your event.

I believe the best thing to do in this transitional period is to embrace RWD and the new HTML5 standards which will ultimately enable your customers to use your website as they always have done, no matter where they are or what device they are on. (This is the approach we are taking, and it is also what Salesforce.com is doing.)

All this will require some patience as the web sheds its skin yet again. Arguably we’re in the early to middle stages of this transformation. So hang on, and in a few years nobody will remember that the web used to be for PCs only.

5 responses to “E-marketing E-ssentials: As the Web Turns Mobile, What Should You Do About It?”