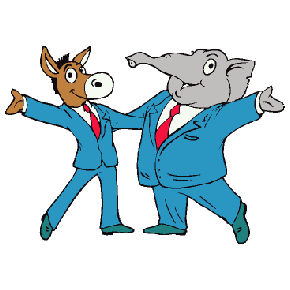 I’m a political junkie, and every four years I become an armchair analyst, watching the presidential election with as much enthusiasm as when I watched the Olympics. I’m interested in how online campaigning and fundraising have evolved over the last few elections.

Eight years ago, Howard Dean pioneered the use of online contributions, but really, nobody noticed. Then four years ago Obama figured it out, and employed a highly effective array of online tools and strategies that helped him win.

We’re now about 60 days out, and it’s not yet completely clear to me what we can learn. Both candidates are using every online outlet there is (did you see that Obama did a Reddit.com “Ask Me Anything” last Wednesday?). YouTube, which was just beginning to have an impact in the previous election, is now mainstream.

But what I am sensing is that this election will be all about “big data.” And that’s really just code for the word segmentation.

If you’ve been watching the news, you know that the candidates have been running around the country carefully crafting a tailored message for each audience they speak to. Their content strategy is all about relevance. Seniors are hearing about Medicare. In the Midwest, farmers are hearing about the farm bill. In states with high immigrant populations, that’s what the candidates focus on.

All of this is much less about politics than it is about segmented marketing. The candidates chop up the country into locations where certain issues matter to specific groups, and they provide a relevant message they hope will make those voters take action.

Well, that’s exactly what savvy arts marketers should be doing too. Figure out the relevant segments of your audience, divide up your database in smart ways, and tailor your marketing messages to each group. The candidates know they’re in a sprint where every dollar of marketing and every minute of airtime matters. Isn’t it the same for you?

In your case, you track your donations, so you know already know who donated “last year but not this year.” You know who was a subscriber last year but didn’t renew this year. You know who is on your e-mail lists, who opens them, and who clicks. You know who bought a ticket to a certain show earlier in the season and might be interested in your new production. Your job is to mix and match all this data and then segment your marketing messages appropriately.

As you think about this, here are a few strategies and segments to ponder.

If you have patrons in your database who bought tickets recently, let’s say within the last six months, these patrons represent a prime segment to receive a value-added offer or discount. Don’t simply mail the same message to your entire base, but recognize people who’ve come recently — send a targeted message that lets them know you recognize them as a recent ticket buyer and want them to come back.

Cross-filter your donations from the last 12 months with your renewing subscribers. See who has made a significant contribution, and offer them something special at your venue. Or check out who has not donated this year but bought tickets at the highest price level; invite those folks to an intermission reception, or in some way try to motivate a new donation. The point is that you know who is coming to your event and you know what their donation history is, so you should use that data to segment your appeals to them.

Take a look at which patrons donated by this time last year but have not yet made a donation this year, and target a special campaign to these folks. There was a reason these folks didn’t wait until last December to make their donation, so why not target them now rather than waiting until the end of the year?

Identify people who purchase tickets to one of your events for the first time, and send them a targeted message by e-mail or phone. Consider placing a welcome note inside their will-call envelope or attach one to their seat. I recently attended a concert where new audience members found personalized invitations taped to their assigned seat inviting them to an intermission reception. For just that small amount of effort, you can make a great first impression and begin cultivating a relationship with those new patrons.

Returning now to politics, I hope you’ll join me in paying attention to all the ways we can discern the two campaigns segmenting their audiences. The era of mass marketing — sending the same message to everyone — is over. We’ve now entered the age of micromarketing, where managing and targeting messages using your database is expected by your customers.

And when you do those things, you’ll notice that you get results that are better than those achieved when you send the same message to everyone. So I hope that as you enter the next season you begin to think about your marketing plans and allocate the appropriate amount of time in advance to do this kind of thoughtful segmentation.

This fall, arts patrons will vote not only in the ballot box but also with their wallets, so I urge you to think like those who are marketing the candidates — start segmenting!

One response to “E-marketing E-ssentials: Marketing Lessons from Obama and Romney”