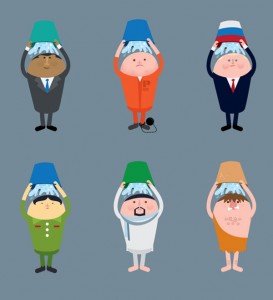 
Kathleen Drohan directs the WQXR Radio Musical Instrument Drive and is the former associate director of public relations for the Boston Symphony Orchestra. Additionally, she consults on marketing and public relations to artists and arts organizations. As a writer, she is a contributor to the book Worn Stories and blogs at mountainsandmoxie.com.

The dog days of summer 2014 will be remembered for many things, but in the non-profit community, this August has brought an unprecedented experience that conjures up everything from awe to hope to disdain. I’m talking, of course, about the ALS Ice Bucket Challenge.

Those three words have generated almost as much eye-rolling this summer as a new Kardashian headline, but it has also brought us together in a remarkable way and united us in philanthropy. In less than a month, the challenge has brought in more than $100 million in contributions to the ALS Association, a group that has traditionally raised about $20 million annually. This influx of funds may allow the organization to make real strides in finding a cure. The most talented groups of fundraisers, marketers, and publicists could sit down together and never come up with a device that would bring as many much-needed dollars as the Ice Bucket Challenge has.

There are genuine questions now about what happens next and how the ALS plans to use the funds, but these will be answered over time. We, as non-profit administrators, though, ought to be looking at the challenge and what it tells us about how our audiences can respond if we talk to them the right way.

First, there are some simple truths of the Ice Bucket Challenge. It was easy to understand and to participate in; easy to personalize; and it was fun. It is a remarkably simple formula but, when mixed properly, can yield magnificent results. Celebrities certainly played their role in bringing attention to ALS, and not every group is able to bring celebrities into its orbit, but there is certainly much that any organization can do with its existing communities. As the days get shorter and the temperature drops, the challenge likely will lose momentum and fade away, but here are some lessons that should stay with us.

Our biggest supporters may not be who we think they are
There are a couple of origin stories on how the challenge began, but there is agreement that the momentum took off after former Boston College sports star Pete Frates, who suffers from ALS, issued the challenge to some friends. The Boston sports community picked up the challenge. It then spread to nationally to athletes and celebrities. Soon it seemed like everyone from Stephen King to Oprah Winfrey and Dolly Parton to Stephen Hawking had taken on the challenge. Their videos turned up alongside those of our friends and co-workers. It gained momentum because people who cared were able to inspire others to care.

Pete Frates’s family was not in a position to make a large financial contribution to the association, nor are many or most of those participating in the challenge, but the net effect is life-changing for the organization. No matter if our organizations support arts, social causes, medical associations, or other non-profit ventures, we have loyal followers we’ve never really talked to. These are the folks who buy tickets for concerts or sign online petitions, but to whom we haven’t traditionally reached out because they are not the ones who write large checks.

By beginning to communicate with these patrons, by asking their thoughts and listening to the responses, we may be able to engage them further and empower them to act.

People want to show their personalities
As the Ice Bucket videos began to populate our Facebook feeds, both celebrities and non-celebrities were able to personalize the videos to tell a little about themselves. Stories were shared about loved ones lost to or suffering from ALS or those who had challenged the participant; settings were carefully chosen, as were the vessels for delivery. The Internet is rife with naked challenges. As the month progressed, the challenge became an opportunity to share personal causes as well.

Matt Damon used toilet water in his challenge to draw attention to sanitation issues worldwide. Orlando Jones dumped a bucket of bullets over his head to draw attention to growing violence and hate crimes. Pamela Anderson did not do a challenge and instead used her time to draw attention to the fact that ALS research relies on animal testing and to ask for a change. By sharing the videos through social media, participants were able to engage and amuse their friends. The videos that have gone viral include celebrity videos, but also those with sincere messaging and those that are funny, creative, or feature unexpected twists.

The challenge, and indeed all of social media, has been dismissed as millennial narcissism. While that may be true, I’d suggest looking at the name of your college library or the plaque on your symphony seat. Fundraisers have always relied on narcissism to appeal to donors. By allowing our small donors their chance at a little attention, we have the potential to broaden our base immeasurably without significant (if any) cost to our organizations.

Social is the name of the game
One of the key components of the challenge was to call out friends, colleagues, or rivals to participate as well. There is a classic 1982 commercial for shampoo that shows the multiplying effect of just telling two friends about something as long as each person tells two others. The Ice Bucket Challenge asked that you share with three friends. It worked. Many videos show participants rolling their eyes at the challenger, but clearly happy to participate. In a lovely twist, the challenge has built bridges in ways that our political leaders haven’t managed otherwise. Republicans have called out Democrats and the reverse, business leaders have challenged one another, and actor Leonardo DiCaprio made a stand by joining environmental leaders in calling out oil company executives. Twitter is full of messages from people not called out yet, wondering why.

By looking into our organizations, we can find many opportunities to allow our patrons to share their appreciation of us with their friends. A free ticket to a show that isn’t selling well may not give the social clout to engage someone in a deeper way. How can we be creative about finding ways to spread that appreciation of what we offer while allowing the patron a social collateral that they may not otherwise enjoy?

No limits
Anyone could take on the Ice Bucket Challenge — and seemingly everyone did, from 86-year-old Ethel Kennedy to toddlers who wanted to join their parents. It was embraced across race and religion. A charming group of Irish nuns seemed to revel in pouring the water on one another. A Hassidic rabbi in Delaware delivered a sincere message before his dousing. Millionaires have done the challenge alongside retirees.

We need to make sure that if there are communities that feel isolated from our organization, either through lack of funds, exposure, or education, we’re creating pathways for them to join us.

Everything is a “win”
An early criticism of the challenge was that people were opting for the ice and Internet fame over donating. Clearly that was an unnecessary concern. We all need money for our groups, and I’m under no illusion about the amount of work on the plates of most non-profit fundraisers, but there is a long game to consider. By creating engagement with the audience, in any way, we create the connection. An ALSA spokesperson said that a year ago 50% of Americans knew what ALS was or were even familiar with the name. They have not re-surveyed, but I would venture that the number has risen significantly.

Another criticism is that the donors are one-time givers and the gift won’t be repeated over time. That may well be true, but they gave this time. Some percentage will remain involved and for those who do not, that they have dipped a toe into the waters of charitable giving is good for all non-profits.

Make it fun
Some of our organizations deal with very serious matters. Some produce what is referred to as high art. We take ourselves seriously, as we should. But it’s also OK to show how our organizations and the people behind them are human beings. By putting a face to ALS, a disease that comes with a death sentence, we were able to see the fun side of Pete Frates and many others who live under its shadow, without forgetting the important cause we were supporting.

The Ice Bucket Challenge has been taken up by many whom we’ve put on podiums, literally and figuratively. They are people whose work has inspired us and who have changed our culture. We’ve seen new sides of these leaders, but we’ve also been able to do it ourselves. We are often seeing famous faces engaging in activities that look exciting or cool, and we wish we could participate. The Ice Bucket Challenge puts us right beside our heroes. With our friends by our sides, we can spend a few minutes engaging in absolute silliness — and feel good about it.

That spirit hasn’t taken away from the serious work the ALSA engages in. Instead, it has made the organization’s work more crucial — a powerful juxtaposition to the few seconds of chill followed, inevitably, by peals of laughter.

Fun may hold a powerful key to fundraising.

The Ice Bucket Challenge was a once-in-a-blue-moon occurrence. The Internet is full of phenomena that capture our attention for a short period and then fade away, and something else will come along. But the challenge has marked a shift in the zeitgeist and one that is, I believe, wholly good. A new generation of charitable givers has emerged where we least expected it, and what they want in return is far easier for us to provide than a new library or even a symphony seat. It’s a little fun, some social clout, and a bit of attention. We can do that, can’t we?