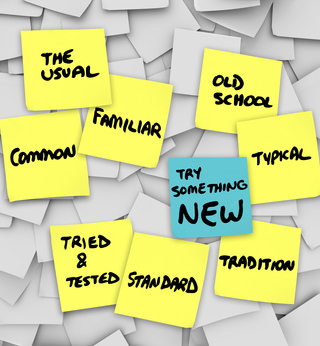 There is an old adage — “Doing the same thing over and over again and expecting a different result is the definition of insanity.” The quote is usually misattributed to Albert Einstein, but I think we can all agree (no matter who said it) that it has the ring of truth to it. Continuing to follow the same well-worn paths year after year while watching funds dry up is a poor way to run an institution.

Arts institutions are by definition creative organizations, but all too often we play it safe when it comes to marketing, fundraising, and programming. When funds are limited, the prospect of failure is a very uncomfortable thing to consider, so we follow the same plan from last year, maybe making some small changes here and there, while we lose 5-10% of our donors here, sell fewer tickets there, and continue to throw good money after bad. Our creativity is stymied by our low tolerance for risk.

I recently attended the Arts Reach Canada conference in Toronto, and I returned with a renewed sense of optimism for the state of arts organizations as well as a notebook full of notes. The biggest takeaway for me was that the organizations that are succeeding the most are the ones that have embraced the philosophy of “thoughtful risk taking.”

Risk taking for its own sake may shake things up a bit, and that can be good on the face of it, but with a more slender margin than our friends in the for-profit world, non-profits have to be smart about how they take chances. The only way to do this is by following the numbers and getting real about what your data is telling you.

Many organizations shy away from making data-driven decisions — they have the sense that if they do only what data tells them to do, the decision making process becomes cold and impersonal — but that’s not what we mean at all. There doesn’t have to be a divide between data and passion, and in fact, having more data frees you to get more creative with your offerings. The National Ballet of Canada sent out a survey to its patrons asking what they thought about the institution, and the results were eye-opening: Even its most loyal patrons felt that the organization was kind of an ivory tower. When the executive director instituted new community programs to encourage more of a sense of engagement, the patrons responded enthusiastically, and the organization has tapped into new and younger audiences!

Another mid-sized organization I spoke with is devoted to data. The director of the organization cited a show they produced last year that was very popular and had sold out. When they looked at the sales data after the run was over, they found that the majority of the tickets were from first-time patrons, not the people who had been coming to their theatre for years. That allowed them to look at their programming for the following season in a new light — they achieved a balance by keeping the type of shows that would appeal to their loyal subscribers and also adding a show that these new theatregoers would like. They were then able to target the marketing depending on whether the patrons had only come to see that runaway hit or if they had come to some of their more traditional offerings.

One other excellent point that the executive director of the National Ballet of Canada made was that if you want to reach out to members of the business community, you need to speak their language — the language of data. Think about how much more valuable a meeting with a local business owner would be if instead of just asking her to place an ad in your program, you could show her the demographics of your audience and how that matches up with her business goals, and convince her to sponsor an event or show. (Again — take a risk! Instead of asking for the same old ad buy that the business made last year, think outside the box!)

Penny Ritco, executive director of the Citadel Theatre, said good reporting will often tell you something counterintuitive, and you have to be confident enough in your data and your interpretation of that data to take the plunge and do something different. If a fundraiser that you have done year after year isn’t giving you the same returns as it did in previous years, you have to be able to let it go and follow your data where it takes you, no matter how much the board president may love the event. Continuously evolving and not falling into comfortable routines will make your organization exciting, relevant, and appealing — bringing in new audiences along the way!
– – – – – – – – – – –