Not So Rotten Marketing

My mother-in-law was in town this past week and one of the things at the top of her to-do list was to see a Broadway show (of course). As the resident musical theatre buff in the family, it was up to me to find a show and book tickets. I ultimately decided on the light-hearted musical comedy, Something Rotten.

This musical received an unfavorable review from The New York Times when it first opened in April 2015 but shortly thereafter gained some notoriety in the Broadway community for its marketing tactics that went viral on Facebook and Twitter. Rather than utilizing more favorable reviews from different publications, they made the bold move to splatter the internet and subway platforms with ads using the only “positive” pull quote from The New York Times article: “A new show that opened on Wednesday night at the St. James Theatre!”

They took this same concept one step further after winning only 1 of 10 Tony Awards that they were nominated for in 2015. Rather than doing what everyone else does (focusing on the award they won, or their star-studded cast) they took out a full-page ad in The New York Times with the headline “Loser!” on top of an illustration of the actors smiling underneath a tomato splattered logo.

To me, this was sheer brilliance because their marketing reflected the exact type of show it is. It’s a tongue-in-cheek comedy with bold show-stopping numbers referencing other musicals. They know that they aren’t a Hamilton, or a King and I, and they have used this to their advantage. They didn’t fit into other marketing molds, so they created their own. However, what ultimately prompted me to write this post, were the emails I received the day of the show about five hours prior to curtain… 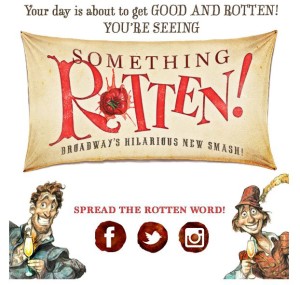 AND the day after! 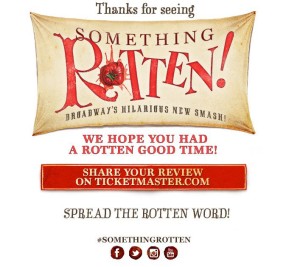 This kind of email marketing is a no-brainer, and very easy to do. Ultimately, I loved the show (as did my mother-in-law). I like to think that this is because I have excellent taste, but the arts marketer within me leads me to believe that part of my positive feeling had something to do with their marketing strategy.