By Aaron Schwartzbord, Director of Marketing

Performing arts organizations are slowly coming around to allowing, dare I say encouraging, audiences to take photos inside their venues prior to events. But there are still many organizations resistant to the idea, holding on to stodgy policies and shaming patrons for trying to get a picture! I was recently at a show where I heard an usher tell an audience member that photos weren’t allowed inside the theatre, but that they could take a selfie in the lobby—the patron was just taking a picture of their program cover. My response, “What’s the fun in taking a picture in your boring lobby?!”

I love taking pictures and sharing them on Instagram before an event! Here’s me and my husband a few years ago just before we saw Come From Away: 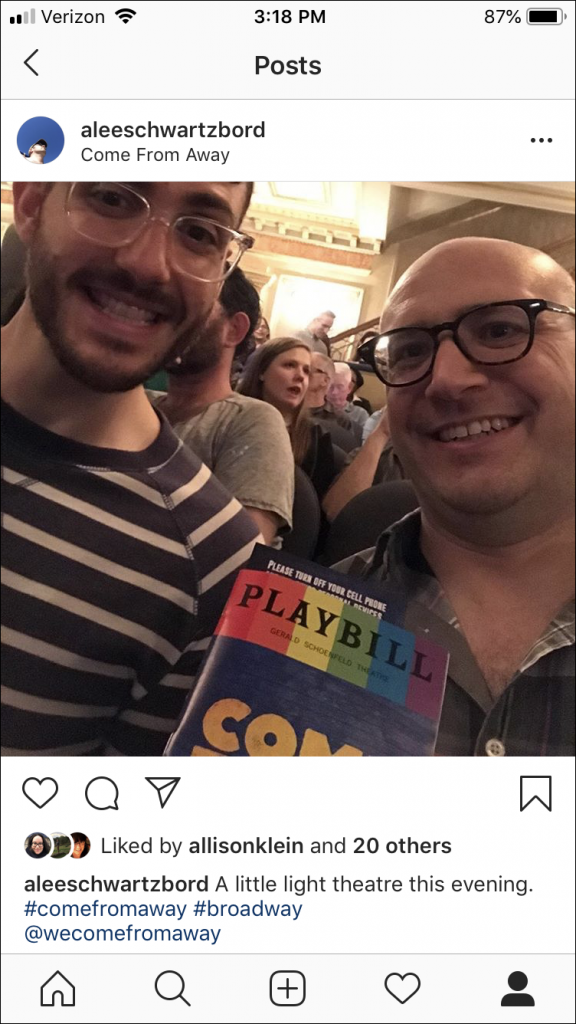 This said, I do understand the predicament of allowing an entire audience to use their mobile devices minutes before curtain. So, how do we reconcile allowing people to take photos in the theatre while also making sure their phones are then subsequently turned off prior to the performance? This past summer Gene Carr and Paul Miller shared a conversation around this topic. In the post, Gene wrote:

Today, we expect to hear, (and often ignore) the pleasantly recorded message to turn off our phones before the performance. Some pay attention, but not all, which is why inevitably the show is interrupted by a ringtone going off.

What if we went the other way? Rather than telling people what they can’t do — why not tell them what they can do?

This resonated with me a few weeks after this post was published when the PatronManager marketing team took an outing to see a taping of The Daily Show with Trevor Noah for a fun team bonding trip.

At the taping, before things got underway, a staff person walked onto the stage and told the audience that we were all encouraged to take selfies and photos of the set before the show started! In fact, the screens behind her showed a feed of Instagram posts from previous attendees who took pictures inside the studio using the hashtag #dailyshow. She continued, saying that once Trevor Noah came out, we had to turn off our phones, further explaining how disruptive a phone going off would be during the live taping of a television show. With this clear set of guidelines laid out at the top of the show, I got to post some great pictures and enjoy the taping without any disruptions! 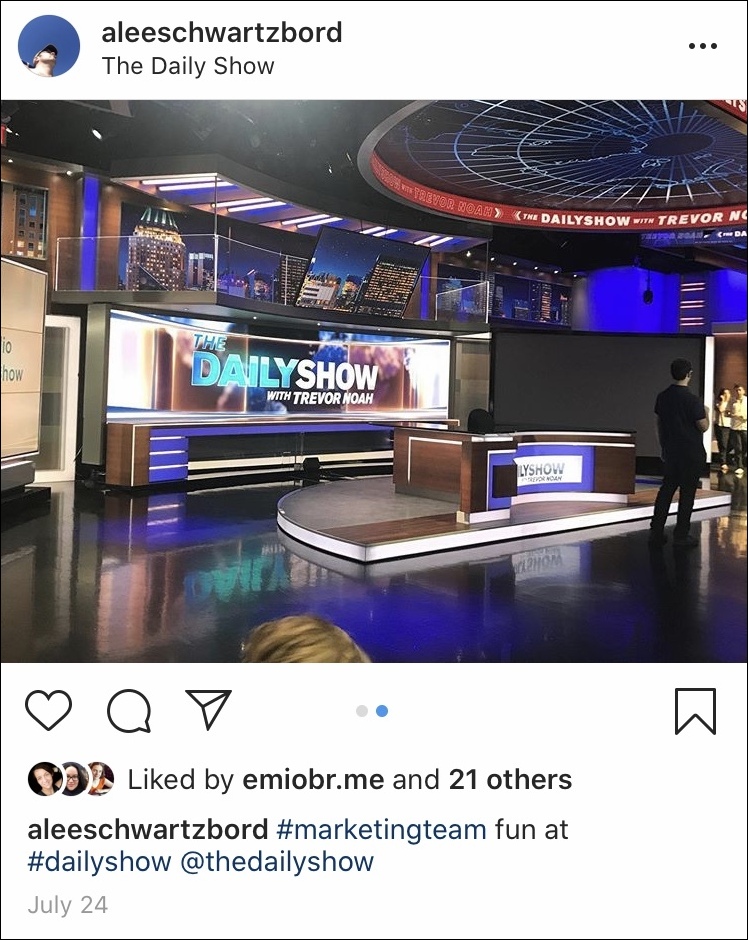 What I found so effective with this method at The Daily Show was the personal nature of the announcement. The woman onstage gave us permission to do what we all wanted to do (take and share photos) while being explicit about when and why we had to turn our phones off. So, instead of a pre-recorded announcement, why not have an actor or a musician walk out onstage prior to the performance and say, “Take the next 5 minutes to capture and post those selfies before the show begins!” Then project a message across the stage like, “It’s now time to turn your phones off!” while the house lights are being dimmed.

Another method that I’ve seen at some Broadway theatres is having ushers go row by row right before curtain, informing audience members that it is now time to turn their phones off. In my opinion, this is also extremely effective; it’s not mean or intimidating, and it has an immediacy and personal quality that a general announcement doesn’t have!

But perhaps there is a legitimate reason why you can’t have patrons taking photos inside your theatre, whether union rules, intellectual property issues, or something else. In this case, you should make sure to offer your patrons alternate experiences where they can engage with the show in a different way, and take the same type of meaningful photos. For example, you could put up a branded display in your lobby, such as a step-and-repeat, or a life-size photo of the set that people can pose in front of! Or, what about partnering with a local artist to create some show-specific art, like the mural of wings that the most recent Broadway production of Angels in America put outside their theatre. Or, dare I suggest, letting audience members on your stage prior to the performance as The Public Theater in New York often allows during Shakespeare in the Park.

At the end of the day, your patrons just want to have a unique experience and be able to share it with the world! And with such readily available technology in our pockets and mediums like social media to post our experiences to, this is not going to change. So embrace it by educating your patrons on how they can use their phones at your venue, and when they need to turn them off! It’s really all about how you handle it. Plus, encouraging social posts will only promote your organization and help your events reach a wider audience. And isn’t that what we all want?

March PatronManager Certified Admin of the Month
Get Our Emails

One response to “Embracing Cell Phones at Your Arts Organization”