Are you telling your organization’s story everywhere you can? I have some data that might inspire you to take a second look at where you’re funneling your marketing efforts online!

Every year at PatronManager, we conduct something we call the “Arts Patron Survey,” a nationwide survey in which we work with 20-30 of our clients to send a detailed questionnaire out to all of their patrons. Over the 15 years of the survey’s existence, we’ve partnered with over 300 organizations to contact over 1.5 million arts patrons, and we’ve received over 125,000 responses.

As you might expect, it’s a great source of information! Michelle and Gene used it to write our book Breaking the Fifth Wall, and we regularly present information from the survey at events. Over the last few years, one of the most important things we’ve learned from conducting this survey is: arts patrons of all ages are online, and that’s the primary place they interact with your organization before they come in person.

With this in mind, it’s important to identify exactly where your patrons are going when they are connected to the internet to further your reach. In this year’s survey, we found that visiting social networks is one of the primary ways arts patrons are spending their time online, second only to reading the news. 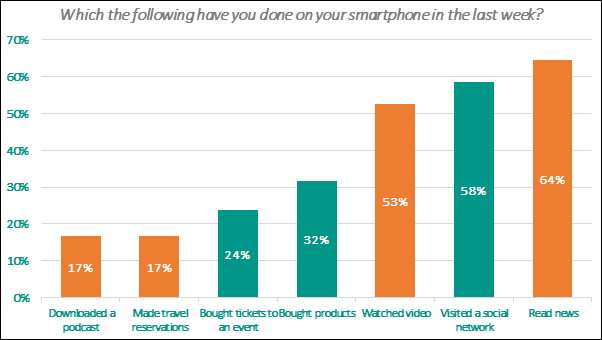 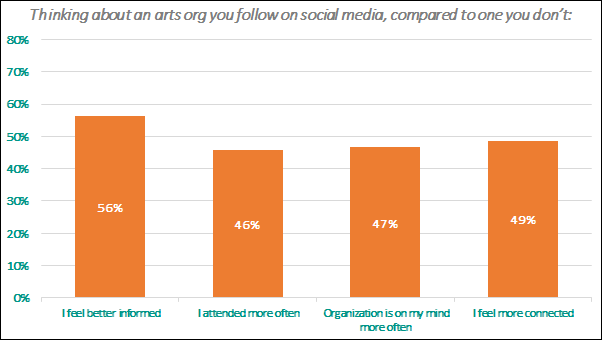 With this laid out, there’s one area of social media I’d like to focus on in this blog post, which has only come to wide use in the last few years: Stories. In case you’re unfamiliar, Stories are essentially slideshows including video or image content that live on a user’s profile for (usually) 24 hours or less before disappearing. They can take many forms, but people tend to use them to chronicle the most interesting moments of their day (see an example from Buffer below). 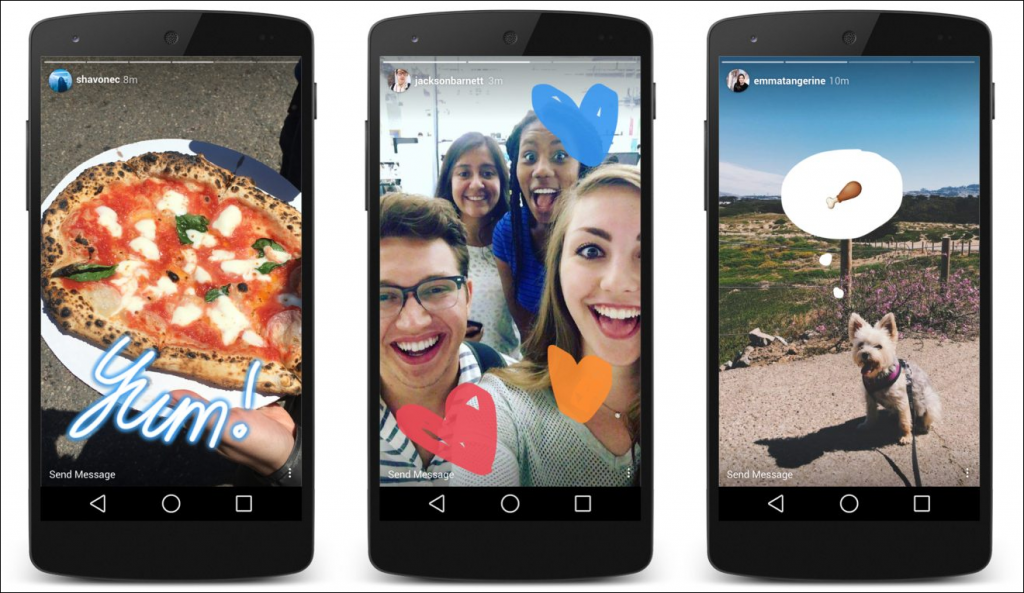 Originally conceived by Snapchat, Stories are now mainstream features on Instagram and Facebook, two of the most highly-used social networks with hundreds of millions of daily active users on each platform. 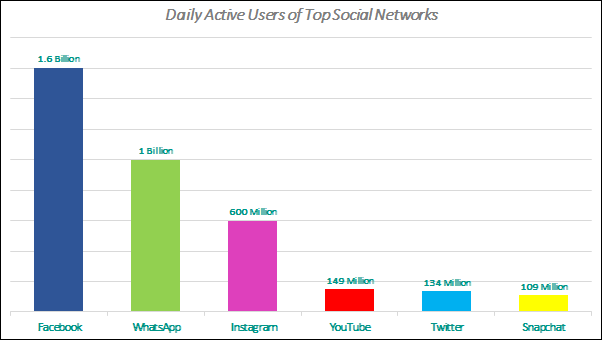 So why should you focus on Stories if you’re already posting on Instagram and Facebook regularly? Well, for starters, due to algorithmic changes on both platforms that now no longer favor chronological feeds, it’s very possible that your organic posts are not being seen by your followers until days after you’ve posted them. Stories, however, are exceptions to the rule. While they are still sorted algorithmically, their ephemeral nature combined with their front-and-center placement gives them an edge, making them the most likely way for followers to see new content! Of the patrons using Instagram stories that we surveyed, a majority have seen a story by an arts organization they follow. 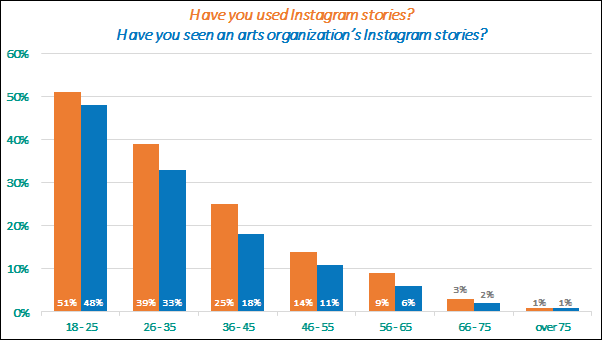 It’s obvious that the use of social media Stories could be a great asset to your marketing strategy, but you may be thinking: “What kind of content should I post?” For ideas, I’ll share some examples from the team behind an Off-Broadway show called Puffs that got me to see their show multiple times.

The content they share ranges from organic videos of backstage pre-show antics to cast member Instagram takeovers to posts about special performances they’re holding! Their posts also informed me of public tests of a future choose-your-own-adventure play called The Magnificent Revengers which I happily snagged tickets for and participated in! And just as their show closed Off-Broadway, they announced another new show via Instagram Stories, which they have continued to do viral marketing for. Even now, as I write this, they’re posting to Instagram Stories live from an anime convention.

What I love most about this team’s use of stories is that they’re very authentic—most of what they post is behind-the-scenes videos of them traveling around, making their art, and having fun. That’s what the ephemeral nature of stories is great for! Stories let them ditch marketing copy and just be themselves—but them being themselves in front of me has kept them on my mind, kept me interested in them and their work, and has kept me going to the new things they’re up to.

Think about how much work goes into everything you do at your organization—the artists’ work behind the scenes, building the very environments the artists are working in, and much more. Stories give you the potential to chronicle that hard work in real-time, just like you’d chronicle the most interesting moments of your day in real-time. More than that, Stories have become the most reliable and prompt way to reach your patrons and fans on social media in the age of algorithms. Instagram and Facebook are platforms they’ve already joined in droves and our data shows they’ve embraced Stories on these networks, so perhaps it’s time to start thinking about telling your organization’s story with Stories. 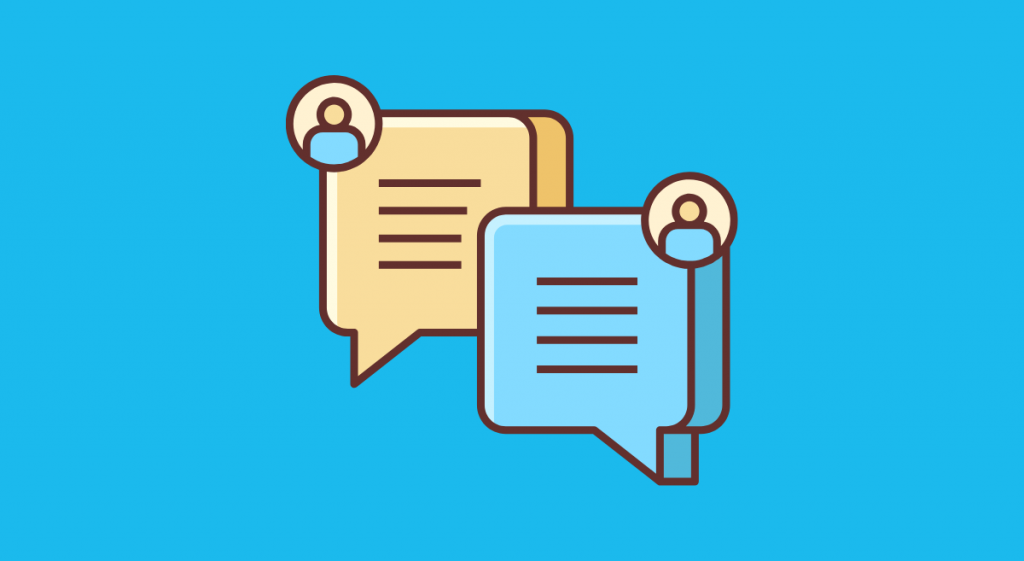