Last month, the gold-standard and most influential arts newspaper, The New York Times, announced it was eliminating its coverage of New York tri-state regional theatre, restaurants, and galleries. And as recently as last week The Wall Street Journal had a similar announcement.

To some organizations, this came as a shock, having relied on the Times for publicly validating their shows, building their audiences, and providing third-party support for their grant proposals. But my sense is that this was predictable, a long time in coming. And if you’re as devoted to reading New York City arts coverage as I am, you’re probably as worried about reductions that could come there as well. That The New York Times decided to cut arts coverage isn’t really a surprise, because readership in newspapers in general has been declining for more than a decade and other traditional print publications continue to struggle to find a business model to sustain them into the future. Arguably, the Times is doing better than most.

Sadly, the audience for the arts — even at 76 million strong — is still too small a demographic to draw the kinds of advertisers that could support a full flank of arts reporters. And because journalism is a business, driven by circulation and eyeballs, advertising dollars follow audience size.

Thus, this news provides yet another siren call for a redoubled focus on the kind of one-to-one digital marketing that I started our company to foster more than 15 years ago when we launched PatronMail, the first email service for the arts. It was clear then that the future of audience building lay in developing individualized “opt-in” relationships with patrons and donors that no longer relied on an intermediary such as The New York Times.

The silver lining is that our research shows that arts patrons are looking to newspapers less and less to find out about arts events near their home. Over the past 10 years we’ve surveyed more than a million online arts patrons, and it’s clear that their reliance on print publications continues a precipitous decline. 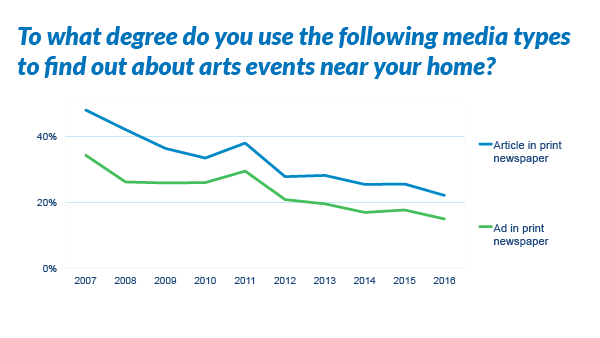 To the extent that your organization has gone full-throttle on digital marketing, you’ve built a buffer. Here are a few “must-do” things that I hope all readers of this blog are doing — things that Michelle Paul and I wrote about in our book Breaking the Fifth Wall, published five years ago:

If we follow the trend, it’s not hard to conclude that during the next five years, traditional arts coverage will continue to be cut back. Although I can’t imagine The New York Times without coverage of classical music, for instance, if I were running an orchestra I’d be getting ready now, because it’s clearly within the realm of possibility.

If you’re relying on any third party — whether it’s your local newspaper, television station, or radio station — to get the word out to your audience, that is a foundation with some serious cracks in it. By now, most forward-thinking arts managers have already adopted the CRM approach to building audiences that I mentioned earlier.

Sometimes change happens incrementally, and sometimes it happens with a jolt. Recently it was with a jolt, and I hope the shockwaves of The New York Times and the Journal’s announcements reach deep into your management team and your board before it’s too late.